I thought I’d wrap up the year by bringing one of my pet projects Ronin Rat and Ninja Cat one step closer to completion. Ronin Rat was a concept I came up with somewhere in 2009; it was originally meant to be a animated feature film, and I already had written the script. But I guess somewhere down the line, I figured it would make more sense for the time being to turn it into a graphic novel first. I had the good fortune to meet someone who would help hook me up with some comic publishers, but it would require more than the script, character designs and concept bible to convince them. It would require a five-ten page sample of what the comic is going to look like.

But as I got started, I realized that the main character of the rat, whose name is ‘Whiskers’ in the script, needed to be redesigned. The original design used in the promotional poster was done prior to the writing of the script, before I had a firm grasp of the character.

He’s slightly buffoonish-looking, and a bit out-of-shape, someone you won’t expect to be a skilled and intelligent swordsman. It fitted the character I had in mind back then, but as the script evolved, so did the character. Whiskers still remains for much the story the cynical, self-interested, scruffy and penny-less mercenary, but now he is someone you know you should be wary of at first glance. He has to look like a likable rogue who will eventually rise up to the occasion to become the reluctant hero. In other words, a cross between Toshiro Mifune’s Sanjuro, Han Solo and Miyamoto Musashi.

As with most main characters I designed, getting there took quite a while… like more than 50 sketches before I arrived at something that I like. 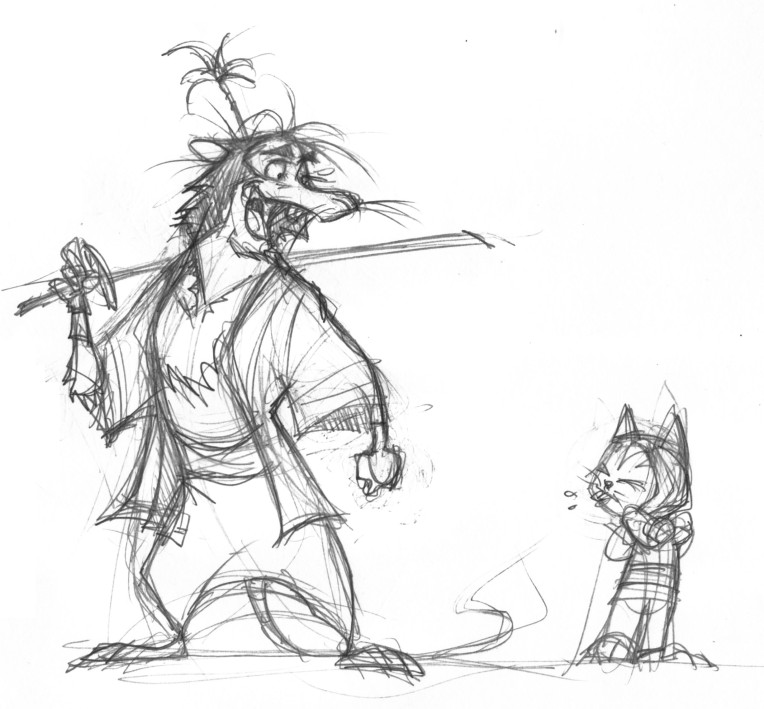 Fortunately, I pretty much had the other characters nailed down in the previous designs. Which means it’s time to move onto the thumbnails…

3 thoughts on “Reforming the Rat”