What happens when you are the type of person who looks at the world quite differently from everybody else, then obsessively puts these intepretations down as sketches on whatever scraps of paper you can find until you have boxes of drawings stashed away in drawers, cabinets and cupboards?  But these unused offsprings of the restless imagination will keep knocking, wanting to be let out, because they belong on the streets, in houses, in conversations between strangers and fiends. They belong in people’s lives.

Here are the projects that we couldn’t resist doing ourselves:

Whiskers is a wily ronin who refuses to stick his neck out for anyone, or any cause, unless he’s the one coming out on top. Maneki is a plucky kitten whose only desire is to be a great ninja. Their paths cross when they are each given a piece of a puzzle that would lead them to a mysterious treasure. Their only chance of success is to work together, something which neither finds appealing. But there are others who covet the treasure for evil purposes, and only they can stop the evil-doers – if they overcome their differences within, and between themselves!

Having moved to Phnom Penh four year ago, this year we finally launched our ‘Candid Cambodia’ series of artprints and greeting cards throughout Phnom Penh and Siem Reap. One of the most amusing things we see in Cambodia, is how a small motorbike can ferry a family of four and much more. And this is the inspiration for the “Pile-Up” art concept, which is the common tread for this series. We don’t really know how best to describe the series other than it is a part-Studio-Ghibli,  part-Where’s Wally (or Waldo for you American folks) way of intepreting Cambodia, rendered in a digital pen and ink style reminiscent of the Tintin comics. (That’s quite a mouthful!)

It all started during the Singapore General Election in 2015. As a fun project, we designed  the “Singapore Polit-icons”, which became an instant hit. So much so that even politicians were asking for their very own polit-icon tee. From there, we came up with more quirky t-shirt designs, which are now sold in Megafash and Naiise outlets in Singapore.

We breathe new life into some of the wisest words ever spoken with an enthralling menagerie of animal characters created especially for this collection. Each illustration is rendered in a pencil-and-digital watercolor style, and paired with a saying or an excerpt from writings by sages and literay figures.

The wise sayings which inspired the illustrations in this book come from a diverse range of spiritual (and the occasional non-spiritual) sources from different cultures and time periods, covering themes from love, to courage, to coping with grief, and are chosen for their ability to inspire, heal and challenge. The diversity is intentional; Wisdom and Truth are not confined to any creed or denomination and there is always beauty in every spiritual tradition. It is this universal beauty that we hope to share.

The Chronicles of Oujo

The Chronicles of Oujo is a series of books based on an original concept about the exploits of an orphan boy Oujo and his friends, the irrepressible halfling Pip, and  the shy elf-girl Lizpella, as they embark on the greatest adventure of all… school!

The first book in the series, Questalon is now available as an interactive app for the iPad as well as a hardcover print book sold at major retail bookstores in Singapore. 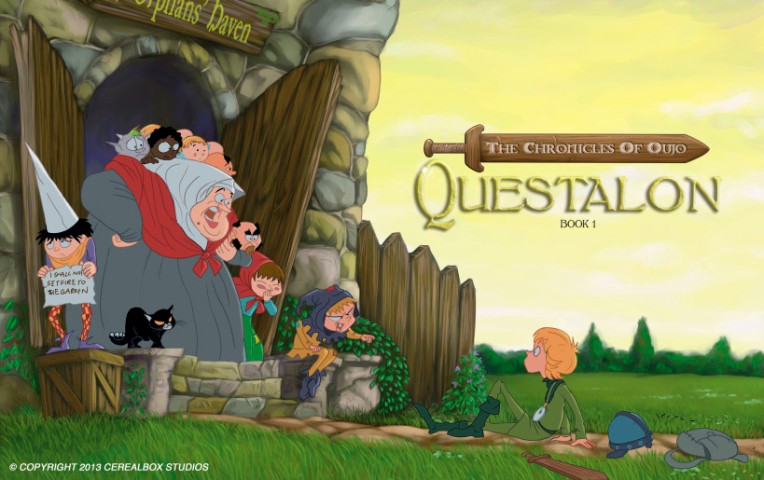 For five days a week, two-and-a-half-year-old Javier stays with his Ye-ye and Nai-nai (Grandfather and Grandmother) as his Daddy and Mommy have to work. The resultant change to the lives of Ye-ye, Nai Nai, and the hapless Shu-shu (Uncle) depicted in this lovingly illustrated book about a day in the life of little Javier.

Javier’s Day is about the joys of growing up all over again through the eyes of the youngest member of the family. It is also about how children are raised in the modern Singaporean context. We may have moved out of our kampungs long ago, but it still takes an entire village – plus the maid –  to raise one child.”